Meet Mr. and Mrs. Cupcake, the most adorable set of pincushions ever!

Make yourself one (or a full dozen) to help you keep track of your pins. (which only makes them cuter. #sprinklesforthewin!)

Click THIS to add this pattern to your Ravelry queue and favorites for later.

This is an easy, beginner-friendly pattern that whips up in no time at all. Working in unjoined rounds, start at the top of the cupcake with the frosting, finishing by working the scalloped edging in the front loops only. Then, using the back loops, you begin the wrapper with some post stitch detail. If you've never done post stitches, I promise it's super easy and this is a great project to try it out with. But, if you'd rather not, substitute them with a normal single crochet.

Because I prefer to make amigurumi in one piece, that's how I designed this pattern. However, I know that not everyone feels that way, so I have included an alternate wrapper that is made separately and then sewn to the frosting. The one-piece version is pink, the two-piece is chocolate. They're both virtually the same once finished, so pick your preferred method and let's get crocheting!

MR: Magic ring. (If you don't know how to do this, simply substitute a ch2, and sc the designated number of stitches into the first ch.)

Inc: 2 sc in the same stitch

Blo: Back loops only. Crochet through the back loops only of the stitches. (Both flo and blo are explained in THIS tutorial by Moogly)

Fpsc: Front post single crochet. Insert hook from back to front around the sc post. Yarn over, and complete as a normal single crochet. Click HERE for my favorite post stitch tutorial, also by Moogly.

Use a stitch marker to mark the first stitch of each round so you know when to begin the next round.

Fasten off and weave in ends.

Insert safety eyes between rnds 7 and 8, centering them on either side of a shell. Using a yarn needle and a piece of black yarn, embroider a small mouth.

Fold down the shells to expose the bls of rnd 10.

Fasten off, leaving a long tail to close the small hole at the bottom.

Fasten off, leaving a long tail for sewing to frosting. Line up each st with one of the blo of the frosting. Stuff the cupcake as you go. Weave in ends and you're done! 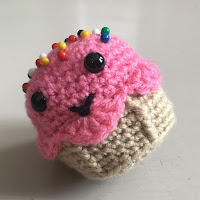 Thanks for stopping by! Enjoy your cupcakes and come again soon.

Popular posts from this blog

January 08, 2019
Believe it or not, I started this in June. I thought it would be a good early-summer-so-sometimes-it's-chilly-at-night piece. But summer came and went and it still never got finished. Then I thought it would be a good transitioning-into-fall piece. But here it is! If you're wondering why that's because this Kimono is over 12,300 stitches and made with almost 1500 yards of yarn. You read that right.  Fifteen-hundred yards.  So I feel slightly vindicated in this delay.  I considered waiting for a more seasonable time to release this pattern but decided against it. I've worn it quite a few times and always get tons of sweet compliments. I hope you enjoy it!  Before we get into the pattern, let's talk about the Diamond Stitch.  Although the repeat is 8 rows, those rows repeat themselves so it's essentially made up of 5 rows. The repeat is a, b, c, d, e, d, c, b, a. In the back panel, this is rows, 2, 3, 4, 5, 6, 5, 4, 3, 2.   Both of the
4 comments
Read more

June 12, 2018
I haven't posted anything in a long time but I'm finally back with a simple flower scrubbie. It's a mere three rounds, requires little counting, and takes about ten minutes to make. You can make a bunch in a single sitting, making them perfect for Croflixing (Crochet+Netflix). They're also versatile-- I've been using mine as face scrubbies but they would be just as good in the kitchen.  I included some round-by-round photos to help with construction. It's such an easy, straightforward pattern it probably doesn't need a photo tutorial but now it's got one anyway.  I ' ve been working on better photos and hope to eventually take good  photos myself.  I don't know if I'm improved much but I certainly have been having fun.  But enough about photos. Let get right into the pattern.  Add this to Ravelry  HERE. Pin this  HERE. Abbreviations: Ch: Chain Sl st: Slip stitch Dc: Double crochet Shell: 5 dc in the same st Sk
3 comments
Read more

January 27, 2019
I have a doozy of a simple pattern for you. These adorable mini flowers take all of three minutes to make and use somewhere between 1-4 yards (The exact amounts depend on your gauge).  This is a one-round instant gratification project. The size is a little bit bigger than a quarter. Depending on how much yarn you have, hook size, and how many petals you make, they can end up very different. The differences add to the eclectic, handmade feel.  I used yarn scraps between less than what I estimate is four-ish yards (left) and just under a yard (far right). So when I say you can use the tiniest scraps, I'm not exaggerating.  They are addictive; before you know it you'll have a whole meadow of tiny blossoms.  Add to Ravelry. Pin on Pinterest.   Find me on Facebook. Tiny Flower Blossoms Materials needed: Scrap yarn (weight is not important) Crochet hook to match (size is not important) Optional: Scissors and yarn needle Abbr
Post a Comment
Read more